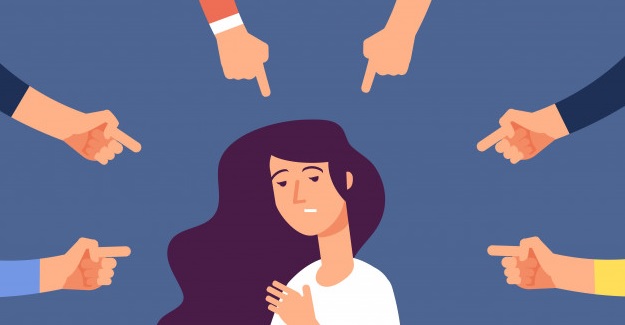 Cutting To The Core: Overcoming Shame

Regular shame vs. core shame. Everyone experiences shame. It’s the excruciating feeling that signals we fell short of who or what we wanted to be in the eyes of another. When we experience shame our body reacts in visceral ways. Our face gets hot, we want to run, lash out, or check out. For some, this is a temporary state that passes. They are able to frame the shaming situation as a singular event, and don’t attribute it to their self-worth. For others, the experience of shame is more pervasive. It triggers a deep seated belief that they are fundamentally flawed or unlovable. In the therapy world, we call this core shame.

The role of past experiences. Core shame can often be traced back to relational trauma. As children, the idea of caretakers and the world at large being “bad” is just too overwhelming. To protect ourselves, we attribute our caretakers’ shortcomings as our own. Take for example a child of divorce. Often we see the child blaming themselves for the separation, even though it is a matter occurring between the caretakers. They say, “did I do something to make them leave?” We can also look at a caretaker who is overwhelmed with work demands or a mentally unwell sibling and has little bandwidth for the child. Again, not being old enough to understand the complexities of the situation, the child can attribute the lack of attention to their being unlovable. Getting over one of these events is a massive task on its own. Unfortunately, some children have repeated events like this over the course of their development.

Societal wounds and internalized oppression. For those with marginalized identities, unpacking core shame becomes more nuanced. By it’s very nature, oppression is contingent upon assigning negative characteristics to a group of people. Being bombarded with images that don’t reflect your reality, or tell you that you are in some way flawed is it’s own kind of trauma. This is especially the case when you have been the recipient of violence for one of your identities by peers and authorities. Over time, people can internalize the violence and accept negative messages projected onto them as true, which can contribute to a self belief that “I’m powerless, weak, or defective.”

Understanding your reactions to shame. Shame is a tricky emotional state to heal from. It’s insidious, and plays in the background of our interactions. Because the experience of shame is hard to recognize in the moment, we can look towards our behaviors to better understand what’s going on internally. The Compass of Shame (Nathanson, 1992) is a great tool to do a quick spot check when you are feeling intense emotions. Do you recognize yourself in one of the following categories?

Moving towards a new relationship with yourself. If you identified with any of the behaviors above, you are not alone. There is a way to survive shame attacks and maintain your sense of self-worth regardless of how much its hurts. You can start by recognizing that the behaviors you have collected to deal with shame served you well at one point in your life. Give yourself a break. Start the slow work of befriending the parts of yourself that hide and attack. Ask them what purpose they serve, how they protect you, and what they need from you? Sometimes this internal check-in when you feel distressed can be enough to slow things down and reduce the sting.

Life in the time of Corona...

The health and safety of our community is incredibly important to us.

Given the Covid-19, we have transitioned in-person sessions to video sessions for the safety of our clinicians and clients. If for any reason you would prefer to meet in person, we will work with you to find a solution. We look forward to supporting you through this period online and again in person once it’s deemed safe.

If you want to keep in touch enter your email